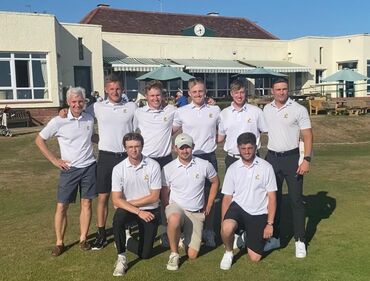 Colts Team Head Table with One Match to play

On a wind swept day with the superb South Beds course playing linksy two local players overcame the challenges to win by One point.
Read More...

Colts Team Head Table with One Match to play

On a wind swept day with the superb South Beds course playing linksy two local players overcame the challenges to win by One point.
Read More...

Bedfordshire Seniors travelled to Aldeburgh GC on the Suffolk coast on July 4/5th to take part in the SEG Southern Counties Foursomes Tournament. Following a very helpful practice round on the Monday afternoon given only 3 of the team had played the course previously the team were in a confident mood over dinner and the compulsory strategy meeting. An early night was followed by an early start with all 10 arriving at the course by 7.00 am, once the pairing sheets had been distributed everyone headed to the practice ground to prepare for the 8.00 am start.

We were led off by Dickie Harris and Paul Sennett who were solid but returned a little disappointed with the 1/2 point gained, our No 2 pairing of Peter Mott and Tony Crockford had an unfortunately slow start and despite their best efforts were unable to reel the opponents from Norfolk in and shook hands on the 17th green. Colin Beard and myself after falling 2 down after 3 managed to get back level quickly and a good middle round put us 3 up resulting in a 4&2 win. Old stager Steve Kavanagh and new boy Terry Mundy put together a very solid round though clubs other than 4 irons were occasionally used to record a very good 3&2 victory, unfortunately our tail gunners Dave Banwell and Gareth Shorley had a tough morning with Banners putter being a little cold and lost 2 down.

So after the morning round of matches there was just 1 point covering all 4 Counties with Bedfordshire in joint 2nd place with Norfolk, just 1/2 point behind Suffolk. Following a light lunch, some pain killers and a loosen up we headed back out onto the course, Dickie and Paul put their morning disappointment behind them and recorded what turned out to be a very important 6&5 victory over their Suffolk opponents, Peter and Tony again started slowly and despite pulling it back to 1 down finally suffered defeat on the 18th green. Colin and myself had a very close match until unfortunately we went off the boil and our opponents stepped up a gear leaving us shaking hands on the 15th green. Back in the Clubhouse things did not look good and we needed 2 wins from our final 2 matches, Steve and Terry again produced the goods and recorded their 2nd win of the day, we could now achieve a maximum of 51/2 points, that can’t be enough more than 1 person said!! but with only 20 points available between 4 Counties mathematically it was, though Norfolk were now finished and only had 4 points meaning the best we could hope for was a tie. Banners and Gareth had to win and the duly did with a hard fought 2 up on the 18th, there is a reason I always put you out last Dave. So we had 51/2 points as did Suffolk, Cambridgeshire were on 4 Norfolk were all in with 4 and 1 match remained on the course, could this year be as tight as last year when we missed out to the last putt on the final hole, Cambridgeshire had to win. A 230 yard 3 wood to 4’0” by our new best mate Kevin Hayes from Cambridgeshire did the trick and for the only time during their round they were in front to win 1 up.

This left the final scores

A tie is decided on total holes up from matches won during the day, so again in an unbelievably close days golf it was major disappointment for someone by the closest of margins, though this year it wasn’t us, Suffolk +15 Bedfordshire +17, how important was that 6&5!!

Lots of thanks, Aldeburgh Golf Club for allowing the use of their wonderful course which was in fine condition and a pleasure to play, along with excellent food, drink and service, Suffolk County especially Phil for the organisation which ran like clockwork, the other 3 Counties involved, this event is serious and very competitive but is also played in the right spirit and it was clear after last year others were genuinely happy little old Bedfordshire had tasted victory, and of course most importantly my team for giving up their time to represent the County and not only putting in a winning performance but doing it the right way with a smile and a beer. We now move onto the Final against the 3 other group winners at Boyce Hill GC in Essex in September where I’m sure the old boys with put up a good showing representing our County.